I love my glasses!

I hear it all over the place, from people who have to wear prescription glasses -- they suck.  They're awkward, they're ugly, they're annoying, I want contacts, I want Lasik.  Nobody likes glasses.  Glasses are like plastic herpes you caught from the optometrist. 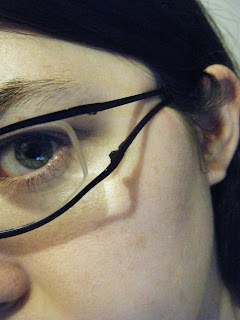 Fuck that!  I love my glasses! 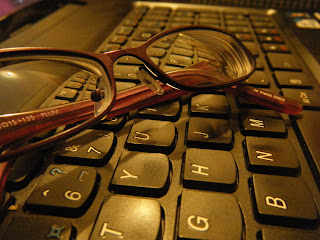 So I love my glasses because when I wear them I can see shit!!!!  Do you not get how amazing this is?  The gift of sight is a wonderful thing, my friends.

Mabel is the only one who gets me.

I have two pairs of glasses -- they're new!  Ish!  I got them a few months ago.  In retrospect, I should have gone for the one-normal-pair-and-one-sunglasses-pair because I really do need prescription sunglasses.  But I just couldn't decide between these two frames, they're both pretty rad.  So I got both of them, because apparently I am completely incapable of making decisions and planning for my future needs!  Yay!

One is a purple plastic pair with a butterfly on the arm joint, and they suit my face really well.  They're just so cute, I can't get over it. 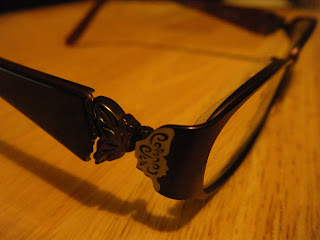 And my other pair is a really neat Geordi La Forge sort of wrap-around thing, and they just looked too neat to pass up.  I spent like an hour agonizing over which pair to pick before I went, fuck it, I'll get 'em both!  It's important to be satisfied with the glasses you're going to be wearing every day for the foreseeable future. 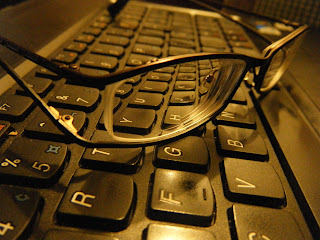 Glasses are awesome. They are so pretty!  And they come in so many styles!  If the pair you're wearing doesn't suit you, then next time get a different set of frames that go with your face.  It's not that glasses are bad, you're just not wearing the right pair.  I'll never understand people who go "I don't like my glasses."  What the hell is there not to like?  I get the "My glasses are inconvenient sometimes" angle, or the "My glasses aren't the right prescription any more so I don't like them" or whatever, but glasses are rad!  If I ever get Lasik or something, I'd keep wearing my glasses just for fashion, even if I didn't need them.  Again, I've worn them all my life so my face just looks right with glasses, but I like the look of glasses on pretty much anybody.  I think everybody should wear glasses, prescription or not, just for fashion.  There's a frame for everyone!  And the more people who wear glasses, the more pressure movie theatres will be under to make 3D glasses that go on comfortably over normal glasses.  It's win-win!