So, we have a Christmas rat in the house.  I've named him Rudolph, in the spirit of the season. 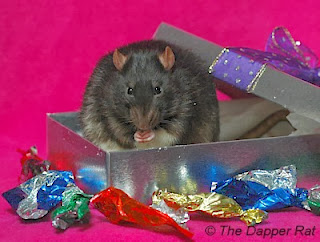 Artistic interpretation of Rudolph, except not.  It's just a random Christmas rat picture I stole from Google Image Search.
Sorry for stealing, The Dapper Rat.

He got in a few days ago.  I know, because I'm a complete night owl so I was the only one awake all night to see him.  And I saw him all right, because he was freaking all over the place.  First I heard something moving in the kitchen from my seat in the living room, so I get up and walk down the hallway just in time to see a dark thing scurry across the way from the kitchen door to dad's office.  "Okay," I think to myself, "So we have a mouse."  No biggie.  We live kind of far back from the street, a little into the woods, so we get mice on a regular basis.  Especially in winter when they are looking for someplace warm and full of food to snuggle up in during the cold weather.  In fact, we'd just gotten rid of a mouse or two in the past week with sticky traps.  Personally, I hate the things; I can't stand hearing mice squealing in terror when they're trapped in one, and pretty much all you can do with sticky traps is either crush the mouse to death (we use wine bottles) or, if the poor thing is unlucky, you don't notice it's there so it dies of thirst over a period of days, all the while struggling and screaming and biting at itself in a futile attempt to escape.  Unfortunately they are easily the most effective type of trap.

Anyway, I thought nothing of it at first, but Rudolph wasn't exactly shy, so I realized pretty quickly that it wasn't a normal mouse in the house.  I caught another glimpse of him as he ran behind a cupboard later, and I thought "That seems to be a bit bigger than your average mouse."  Later on I'm back in the living room, sitting on the sofa with my laptop on my lap, and I see something out of the corner of my eye.  I look up just in time to see his tail flash by in the gap between the garbage can and the chair; it's long, dark, thick and held at least an inch off the ground.  I don't know a lot about rats, but as an animal lover I've happily played with friends' pet rats and none of them seemed that big.  But it was most definitely a rat's tail.  Next time I go into the kitchen, I see his adorable ratty face poking out from behind a bag before he takes off.  Later on I get a properly good look at him (and he is huge) when he climbs up onto the tv stand to explore...about five feet away from me.  I guess he figures that as big as he is, he can take anyone, especially the short person on the sofa.  To be fair, he probably has a point.

Anyway, clearly something must be done before Rudolph starts feeling at home.  I spent most of that night chasing after every noise I heard with a bit of pipe in my hand, stomping and shouting at him.  I have no idea how my family slept through it.  I didn't have any proper rat traps, but I had a few mouse-sized sticky traps so I was hoping they could do the trick.  No luck.  I set one behind the bag and in front of the drawers, where I saw him before, and not fifteen minutes later I hard thrashing and the bag rustling in the kitchen.  But when I get there the bag is already knocked over and the trap gone.  I pull out the drawers (they are a plastic set on wheels, we are theoretically still renovating the kitchen) and yep, it was hauled underneath them, no rat inside.  Damn.  Later on, when I catch him trying to go at the big garbage bag (successfully tearing it all to pieces before I can chase him off) I take the ineffective trap and put it by the bag to ward him off, using his freakishly large intelligence against him.  We both know the trap won't actually stop him...but he knows it is a trap.  It must have worked, because he stayed away from the bag after that.  The next day I go to Canadian Tire with Dad and we buy half a dozen rat traps.

We set two as soon as we got home, then promptly lost the bag.  Grammy was spending the night that night, so I stayed up later than usual (or rather, as late as I normally do, but intentionally this time) both to be around to help her if she needed it and to listen for Rudolph and keep him from eating my sleeping grandmother's face Compsognathus-style should he show up.  I heard him rattling around a lot and I think I caught a glimpse of him once or twice, but nothing like the night before.  The next night my brother Sandy hears him; he was int he front of the house, and I was in the living room at the back.  He comes tearing down the hallway like a shot and vanishes into his bedroom, bellowing "MOM SAID I COULD!"  I figure out what he's talking about when he comes out and runs off with a bow and arrow; clearly a Rudolph situation.  I haven't got the pipe at hand this time, so I grab the death stick (an electrified tennis racket I use for flies, a gift from my mother last Christmas) and follow behind.

We don't catch Rudolph, because rats are quicker than people looking for weapons to kill rats with, lucky for them.  But we do find the Canadian Tire bag with the rat traps in it, so we set a bunch.  Two around the front of the house, where we keep hearing him.  One behind the silverware drawer, where I saw him that one time.  One in the attic where Sandy thinks he heard him and where we found a dead bird that Rudolph may or may not have been eating.  One in the bathroom behind the tub, where my parents think he might have gotten in by squeezing around the pipes.  One underneath the record player; I haven't seen him over there yet, but mice like that area as we've caught a few in the sticky traps below there, so we might luck out with Rudolph.  I feel like there's another one or two that I have forgotten, but I don't think there actually are.  I'm just imagining things.  Anyway, we rat-proof the house as best we can and post a list of the traps on the fridge so nobody breaks a finger digging too deep in the food cupboard under the microwave and go to bed.  The next day when I get up somebody's scribbled "RAT IN BATHROOM TRAP" but I checked and the trap has been sprung but there's no rat in it.  I think he set it off and someone heard that and wrote it down without checking to see if it actually got him.

I am hoping we catch him before Christmas.  I don't want Rudolph getting into and ruining my Christmas candy or anything.  Sandy had to get rid of his Christmas stocking last year because a mouse chewed a hole in it.  Not during Christmas, I mean, but over the summer when he had it put away.  And Dad is already sick of dealing with rodents getting into the garbage box down the driveway and ripping the garbage bags up and spreading trash everywhere, we would rather keep that out of the house if at all possible.  If we do catch him I will post updates and possibly pictures, if I ever find my camera cable to connect to the computer so I can actually take my photos off the camera!

Email ThisBlogThis!Share to TwitterShare to FacebookShare to Pinterest
Labels: adventure, my life, real stuff is happening, Rudolph the Rat, storytime, this got long